After the collapse of the bipolar capitalist system and the victory of the Western Block, the Democrats promised world peace and public welfare. According to the New Order, it would be without disorder, economic crisis and far from the reach of war. In the New Order the US bourgeoisie tried to maintain the USA’s position as an unrivaled global superpower. This ambition on the part of the USA led to war and instability around the world, for example the wars in the Balkans, Afghanistan, Iraq and dozens of other small wars.

On the 20thof March 2003, in order to maintain its position of power and to bully its gangster rivals, especially France and Germany, and to address the ‘fact’ that Iraq possessed weapons of mass destruction, the USA launched a blood bath. However, since then the Americans have failed to find weapons of mass destruction in Iraq. The USA is the only gangster to ever have used nuclear weapons twice. The atomic bombing of Hiroshima and Nagasaki, ordered by criminals such as “Harry S. Truman”, resulted in about 220 000 civilian deaths in the heat of several million degrees from the atomic bomb, and has been noted as most important criminal action by a ‘big gangster’ in human history.

On December 15th2011, the USA’s military presence in Iraq came to an end. Leon Panetta, the Secretary of Defense of the USA, said in his speech on the occasion of the withdrawal of US forces from Iraq:

Along with Turkey’s opposition to Israeli policies (which go against US policy) or the threats of the Israeli government to bomb Iran’s nuclear facilities (again in contradiction to US policy), comes the USA’s insistence on destabilizing Syria, which itself goes against current Israeli interests. All of these cases indicate the decline of the USA’s power as the only global superpower in the Middle East.

To understand the present situation and to respond to its requirements, one must understand imperialism in the era of decadence capitalism, namely through understanding the development of global capitalism and global markets from an internationalist perspective. If, in the development period of capitalism, imperialists were looking for new colonies, then in the era of decadence capitalism, imperialism embodies the redistribution of the global market and this includes all the countries of the world. In such circumstances all countries, whether large gangsters such as the USA and Great Britain or small gangsters such as Iran and Turkey, have tried to undermine each other and take over the market.

Iran, in line with its imperialist ambitions, is claiming its role in the region. Large gangsters (large imperialists) want to undermine its role, and an agreement seems to have been reached among the Democrats to limit Iran’s role as a regional power. Of course European gangsters hope that the process of undermining the economic, political and military power of Iran will lead to an increase in the influence of European powers in the region. Russia and China, however, do not see any reason to strengthen the declining influence of the USA in the Middle East. Iran looks after its own interests and fulfills its role as a regional power, and does not wish to cede its position under the threat of pressure and punishment from the big gangsters. 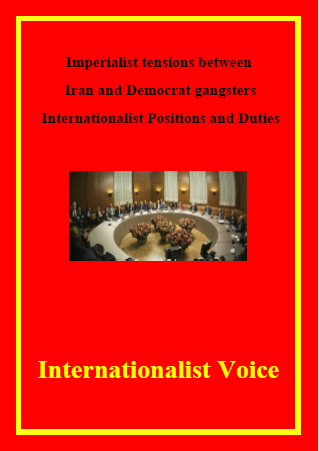