The New Arrangement of Imperialist Powers in the New Global Conditions

As part of its strategy to consolidate its position in the new world order, China introduced the “New Silk Road” project in 2013. This plan is one of the most ambitious imperialist initiatives in modern history. The New Silk Road, with its infrastructure, will allow China to access the ends of the globe and expand China’s imperialist power everywhere.

The US, Japan and major European powers are worried about China gaining power, and divisions and dispersion within the former Western bloc have intensified. Recently, imperialist tensions have also intensified between the US and China on the one hand, and the US and Iran on the other. Former US allies in the thieves’ lair otherwise known as the Security Council did not vote in favour of the US resolution, and the US suffered a humiliating defeat. News of the 25-year strategic agreement between Iran and China has attracted a lot of attention, not only in Iran but all over the world. Even the Western and Chinese media have talked about the axis of China, Russia and Iran.

But an examination of the relations between China, Russia and Iran shows that each of them has pursued its own imperialist interests, and the divergence in their imperialist interests can clearly be seen. However, it seems that all three of these countries tend to converge on the issue of competition with the West, led by the US.

The Islamic bourgeoisie describes the 25-year agreement with China as a “comprehensive China-Iran strategic partnership based on a win-win approach”. In other words, the Islamic bourgeoisie believes that both countries will benefit from the agreement. The Islamic bourgeoisie claims that this agreement will not only boost Iran’s economic growth but also strengthen Iran’s position in the region. The reaction of pro-Western opposition has been accompanied by anti-communist hysteria, declaring that the “Communist Government of China” violates national sovereignty; that this agreement is not in the national interests of Iran, and that it will perpetuate totalitarianism and the violation of human rights and democracy. The pro-Western opposition has written a letter to the Chinese government, condemning the “bondage agreement”, asking for it to be rescinded and calling upon the West to oppose this “disgraceful agreement”.

Such an agreement has not come out of the blue, although the true dimensions of this agreement are not yet clear. This agreement can only be evaluated in the context of the New Silk Road strategy, the new world order and the inefficiency of the “Joint Comprehensive Plan of Action” (JCPA), especially after the US withdrawal from the JCPA. The Islamic bourgeoisie has increasingly turned to Russia, and especially to China, in order to counter the political and economic pressures of the West, led by the US. The Islamic bourgeoisie sees the Chinese alternative as the most viable alternative to save the bankrupt peripheral economy, to counter destructive US sanctions, to circumvent the dollar and to invest.

The first step towards an internationalist explanation (and intervention in the class struggle) is to examine the new arrangement of the imperialist powers and the balance of power among social classes in the new world conditions, and to gain a better understanding of the new conditions from an internationalist perspective. It is hoped that this article will be a step towards fuelling debates in this context within the proletarian political milieu. 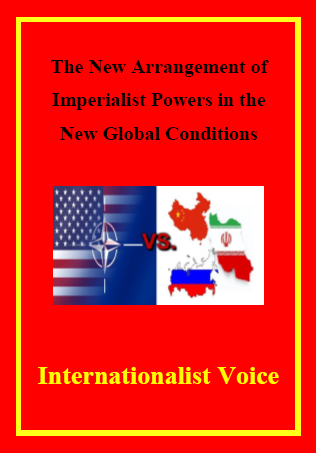