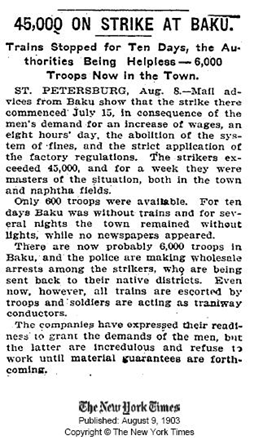 On 9th August 1903, the New York Times reported that 45,000 people were on strike in Baku, shutting down public services.

Since 27th September 2020 a new round of tensions has emerged between the Republic of Azerbaijan and Armenia, in the form of a bloody military conflict over the Nagorno-Karabakh region. The infrastructure of both countries has been targeted and hundreds of people have been killed, many of them civilians. This time, the conflict is being waged in the name of ousting the occupiers from the ‘Motherland’. This imperialist tension has seen workers targeted as the ‘cannon fodder’ of the conflict.

Some countries are escalating the tension in the region, through actions that support their own imperialist interests. Turkey and Israel are among those with the most important influence, because Azerbaijan is one of their main energy suppliers. Turkey seeks to expand its influence in the Caucasus through its ideology of Pan-Turkism. It has officially backed Azerbaijan and has stated that Armenia should immediately end its occupation of Azerbaijani territory. Israel also seeks to increase its influence, because in addition to lucrative oil and weapons trading, also uses Azerbaijan as a base from which to conduct espionage and sabotage activities in neighbouring Iran. In contrast, Greece, a member of the European Union and a long-time enemy of Turkey, has spoken of ‘Azerbaijan’s aggression with Turkish support’. [1]

Other countries in the region have also been active in supplying ‘cannon fodder’ in the war. In the early 1990s, the Afghan Mujahideen were sent to Azerbaijan to fight alongside the Azerbaijani army. The same thing is happening today, albeit in a different way. It has been reported that Turkish security companies are sending mercenaries from Syria to Azerbaijan and Armenian mercenaries have been sent to Armenia. Modern, advanced weapons, especially Israeli and Turkish drones, have enabled Azerbaijan to strengthen its military position. Turkish and Russian interests in Syria and Libya are currently at odds with one another, therefore increasing Turkish influence in the Caucasus means reducing Russian influence. Turkish Habertürk writer Prof. Dr. Kürşad Zorlu describes Turkey’s energy needs and ambitions for regional power as dependent upon the defence of Azerbaijan. He writes:

“The sovereignty of the Republic of Azerbaijan is not the only thing that is in danger. Turkey’s energy needs and its position in the region will also be endangered.” [2]

Both sides are employing nationalist rhetoric and hate-speech, using any means necessary to achieve their aims. Both believe they are the victim of occupation and consider the other side to be the aggressor, accusing them of bombing civilians. These are typical examples of the propaganda and psychological tactics used in the war. Ilham Aliyev, President of Azerbaijan, has stated that the war will continue until the Armenian occupiers are completely ousted. Armenia has claimed that Turkey shot down an Armenian fighter jet when it entered Armenian airspace. Turkey has responded saying that this claim is not true and is simply a psychological trick. The Azerbaijani Leftist Youth issued an anti-war statement opposing the use of nationalism, condemning the mobilization of young people to war, denouncing the use of workers as ‘cannon fodder’ and emphasizing class solidarity between Azerbaijanis and Armenians. Despite its shortcomings, the statement is a commendable challenge to all those in power who are advocating for war.[3] It is hoped that such a voice will also be heard from Armenia.

The crisis of capitalism wreaks more destructive and inhumane impacts within peripheral capitalist societies than within metropolitan capitalist societies. The working class in Armenia and Azerbaijan is paying the most severe price. Both countries have recently increased their military budgets, to the detriment of the standard of living of the working class. When capitalist rulers call for war, the working class are required to answer that call and defend the homeland as ‘cannon fodder’. This takes them away from the fight against a multitude of problems including slavery, wage slavery, living below the poverty line, frozen wages and mass unemployment.

This new round of conflicts in Nagorno-Karabakh is yet another illustration of the extent to which nationalist identity serves the interests of capitalism and acts against the working class and the lower strata of society. Nationalist identity, even its most radical form, deprives workers of their class identity by turning them into patriotic soldiers who are forced to protect capitalist interests.

The Baku proletariat was once a major force for the world’s working class, especially in 1905 and 1917 when it was the poster child for the World Communist Revolution. At that time, reactionaries had not yet succeeded in spreading ethnic hatred between Azerbaijanis and Armenians. When the Ottoman and Russian governments fuelled the bloody conflict between Azerbaijan and Armenia and tried to make the workers ‘cannon fodder’, the Baku proletariat exposed the nature of this war and was very effective in limiting the loss of human life.

The name of Baku was once synonymous with the deepest form of class solidarity. Azerbaijan, Armenian, Georgian and Russian working classes fought side-by-side against capitalists, working together to form factory and strike committees. The Baku proletariat was the source of inspiration for the proletariat throughout the region. The story of the battles fought heroically by the Baku proletariat is a poignant and much-romanticized subject that was well known across the world. The 45,000-strong strike in Baku, that shut down public services, was once the headline in a New York Times article.

Blood, filth and sludge fall from head to toe of the cruel capitalist system. From within the capitalist peace, only the flames of war will ignite. As long as capitalism continues to go unchallenged, wage slavery, war, pandemics etc. will be a part of our daily lives. Our interests lie in the class struggle, where the workers come together and fight for common class interests. We do not fight on the basis of false identities such as ethnic identity or religious identity, but on the basis of a class identity common to all ‘wage slaves’. Instead of being cannon fodder in the gangsters’ war, instead of continuing barbarism, instead of adhering to the filthy capitalist system, we must strive towards communist revolution and end the viciousness and wretchedness of capitalism.

Down with the war!

Long live the class struggle from Baku to Jerevan!