”The philosophers have only interpreted the world in various ways; the point, however, is to change it.” Marx

In July 1999, when students began to protest the closure of a “reformist” newspaper and became a black army of one of the factions of the bourgeoisie, as well as during the Green Movement’s protests at the results of the presidential elections in June 2009, people practically became a black army of a faction of the bourgeoisie. In our view, both of these protests were reactionary and against the class struggle. Over time, in late December 2017 and early January 2018, we witnessed popular street protests. The protests of late December 2017 and early January 2018 were not reactionary compared to previous protests; it did not turn into the black army of a particular faction of the bourgeoisie, but was a popular protest with weaknesses and strengths. For a better understanding of these protests, we refer to our article entitled “Street Protests Over Capitalist Barbarism and Internationalist Positions” [2]. The social events, labour protests and strikes, which became more radical every day, in the autumn of 2018, stopped being defensive and took on an offensive form. A balance sheet of the labour protests and strikes has been published in a brochure [3]. The internationalist currents in relation to the events we mentioned have played a passive role and, at best, published a formal essay which was more ambiguous than contributing to political clarity. But the ICT in relation to the recent labour protests and strikes published four articles and tried to play an active role. The published articles are as follows:

Apart from the fact that the articles were written from an internationalist horizon, the publication of articles at various points in time has possibly been part of playing a greater part in the process of labour protests. Simultaneously publishing articles in several languages was provided internationalist positions (albeit weak) in the middle of the hubbub on the left of capital in order to inform the public and other class sisters and brothers. Despite the great strengths of these articles, they have weak points and some ambiguities. It is hoped that, with reference to them and learning lessons from them, they nonetheless represent a step towards the transparency of the proletarian political milieu. 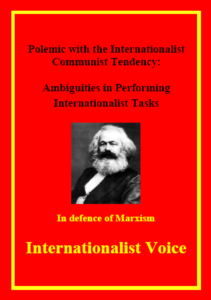