Polemic with the International Communist Current: Working Class or the Masses?

The International Communist Current (ICC) [1] is one of the main currents of the communist left which historically belonged to the communist left. The ICC tendency, as it has emerged, has always defended proletarian positions, especially during the black anti-revolution era. We have declared any attack on the currents of the communist left as an attack on ourselves; of course, the currents we are assessing belong to the communist left. That is why we have declared solidarity with comrades, if it is necessary (the ICC, the international communist tendency, etc.). The last manifestation of this solidarity is a paper entitled “Discrediting the Revolutionaries Only Serves the Interests of the Capital state” was a response to the slogging and discrediting of the ICC and perhaps the ICC been shaped by the CIA. Although we defend the proletarian nature of the ICC and consider its basic positions to be proletarian and communist, we have criticized in relation to three issues:

Despite these correct positions, the ICC has ambiguities about class consciousness, and the role and function of the revolutionary organization; in practice, it reduces its role, functions and performance to the level of a revolutionary publication. The root cause of the internal crises that the ICC has experienced was the ambiguity surrounding this issue.

Unfortunately, all four texts were written without the slightest research and thus with many mistakes, both from the perspective of positive arguments and persuasive discussions. The publication of these articles not only failed to clarify the proletarian political milieu, but it also created many ambiguities. Rather than reviewing every four articles, we saw it as logical to portray the social events that have taken place in all three countries with regard to the facts that took place, and this could be seen as a constructive critique. We did this and published an article entitled “Street Protests Amid the Barbarity of Capitalism: The Only Alternative Is Class Struggle”. We hoped that the ICC would seriously address the issues raised and contribute to the transparency and clarification of the proletarian political milieu. In particular, comrades promised repeatedly during the past 10 years to respond to our critiques. Finally, after 10 years, the ICC broke its silence and gave its response. Apparently both our expectations and our 10-year wait were unnecessary. The ICC, with a less serious text than previous texts, and with many mistakes, under the title “Internationalist Voice and Protests in the Middle East”, practically let the cat out of the bag. Before proceeding with the discussion, the transparency of some issues is firstly necessary.

Contrary to the slime propagation of recent years that the ICC has lost its revolutionary nature, we always emphasize the proletarian nature of the ICC, and our discussion with comrades in all three contexts goes back many years.

Another point is that we distinguish between popular struggles and the struggles of the working class. The popular struggles mentioned in this article, in the case of Iran, are the same protests as those in late December 2017 and early January 2018. For more information on the position of Internationalist Voice in relation to labour struggles, see our analysis of the recent strikes and labour protests, under the title “Lessons from Strikes, Labour Struggles and Internationalist Tasks”. 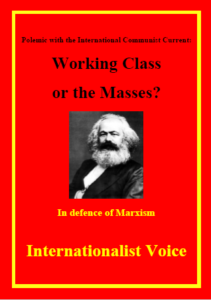