The working class in Iran is facing some of the most difficult economic and social conditions. Millions of workers are unemployed, with many thousands of them joining the huge army of the unemployed. The wage level is lower than the poverty line. Wage slaves, who themselves are the creators of human blessings, are themselves deprived of basic needs. With its sinister face, the peripheral capital in a crisis has created an earthly hell for wage slaves. American and Western government sanctions, in which Western gangsters punish Iranian gangsters by for genuflecting before the Islamic bourgeoisie, have had adverse consequences for peripheral capitalism. The bankruptcy and closure of production units, along with the fall in the value of the national currency, was only meant to impose austerity policies on wage slaves, thereby further reducing the purchasing power of workers.

We witnessed labour protests before the street protests of January 2018. At the time of the street protests, the working class, as a social class, continued to protest and strike without engaging with street protests as a social class. But, from this year, the working class has started a new chapter in its struggles: it is safe to say that, after the labour struggles of 1978-1981, for the first time, labour struggles have grown qualitatively and reached an equivalent level. Workers’ protests and strikes occur every day, although they are deliberately not accurately reflected in the news. On average, there are 17 protests or labour strikes in Iran every day [1]. Although labour protests have so far not involved two key industries, the petroleum industry and the automotive industry, part of the industrial proletariat is involved in labour protests and strikes.

Under the slogan “Death to the worker, peace be upon the oppressor”, rather than joining the class struggle, the worker chose to commit suicide in despair. But, in the short term, not only did the slogan of the workers change into “Peace be upon the worker, death to the oppressor”, but anti-capitalist slogans were also disseminated via labour protests and strikes. In other words, this review will consider the flogging of workers during labour protests up to the most powerful class demonstrations. The important point here is that the examination and explanation of workers’ protests and strikes are not only based on news updates but also on points of view, theories and reasoning.

The reality is that there is an ongoing, sometimes secret, sometimes overt, war between gangsters. The United States, along with Saudi Arabia and other capitalist institutions, has begun a psychological and economic war to bring Iran’s economy to its knees; indeed, it has been somewhat successful in this matter. Peripatetic capital dilemmas, political insecurity, US-Saudi threats and so on have caused the value of the rial to fall by at least 150% in the past few months. In other words, the purchasing power of the working class has fallen by 90%.

The war of Islamic and Western gangs over their imperialist interests do not encroach on the interests of the working class. At one time, the danger of the collapse of society and the fate of Syria seemed to have existed for Iran. As we wrote earlier, if the working class is a social class leading social struggles, not only will the destruction of society be ended and not only will the danger of war and the possibility of foreign interference decrease, but the movement itself, because of its anti-capitalist nature, will also expand the class struggle in the region. We emphasize that the evolution of class struggle not only prevents the collapse of society and reduces the possibility of a crisis caused by gangsters like America, but also increases the chance of expanding anti-capitalist struggles to the capitalist metropolis. In the evolution of the class struggle, the political intervention of the right or left of capital and the actions of the working class as a black army will undermine reactionary interests.

The protests and strikes by teachers and workers at the Heavy Equipment Production Company (HEPCO), the National Steel Industrial Group (NSIG) and the Haft Tappeh Sugarcane Agro-industry Company have special properties. A responsible review and compilation of the lessons from these struggles are essential in fighting future battles. The effects of these struggles, especially the battles of the Haft Tappeh Sugarcane Agro-industry Company workers, will be highly useful in spite of all the weak points in future battles.

Different tendencies of the left of capital have provided different explanations for labour protests. With the metamorphosis of the Marxist concept, the most radical phrase among them announced the slogan “Go forward into revolution!” and stated that the solution for the working class at the present time was represented by the workers’ councils formed at the Haft Tappeh Sugarcane Agro-industry Company. The defunct councilist communism of peripheral capital created the heroes of the councilist seizure of factories, which in turn was regrettably defeated by reformism. Against the backdrop of these tendencies, internationalists must also, by examining and summarizing the struggles and strikes of the workers, in the course of studying these struggles and strikes, outline their horizons and their duties. 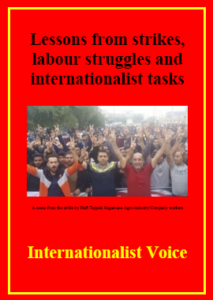