Polemic with the International Communist Party (Proletarian): Worker Communism Belongs to the Left of Capital, Not Petty-bourgeois Democratism

Worker-communism, by grasping at words such as international, revolution and communism, and with its radical phrase, has tried to introduce itself as a historical current which advocated Marxism against other anti-revolutionary tendencies. It has attempted to suggest that it is an internationalist current whose platform will become the platform of the social revolution, not only in the Middle East, but also in European and American workers’ movement. The acceptance of the “A Better World” programme of worker-communism by a party in the US and an organization in Belgium and France as their own programme was considered as an expression of the internationalism of the platform of worker-communism. Of course, both of these currents have apparently been removed from the scene and no longer extant [2].

The ICP in issue 13 of its English organ, Proletarian, published an article titled “‘Worker-communism’ or Petty-bourgeois Democratism?” [3]. It seems that the comrades are worried about this bourgeois and counterrevolutionary current with its radical phrasehase, as demonstrated below:

“This current can entice militants or proletarians in search of truly revolutionary positions.”[4]

The comrades’ concerns are completely understandable, but their reaction regarding worker-communism reflects their weaknesses and uncertainties with regard to the left of capital. The text from the comrades does not help to clarify the proletarian political milieu; rather, it creates ambiguity. The fundamental question is, can internationalists criticize the left of capital? A critique by the internationalists of the left of capital is only through communist revolution. We have no criticism of this bourgeois and counterrevolutionary current; but, from an internationalist perspective, and in defence of Marxism, it is publicly exposed through a series of articles and its bourgeois and anti-worker nature and function [5], and we defend proletarian positions. In the eighth section of the series, we have responded to all their smearing of the communist left and rattling around to defend the basic positions of the communist left.

The article contains a lot of ambiguity and misinformation as well, which we will refer to. The sources that the comrades have used for their article have been the statements from worker communism itself, their followers or Wikipedia. The comrades also received some parts of our series of articles entitled “Worker communism Radical Conscience of the Left of Capital”, but they could have been more accurate in referring this resource [6].

Another weakness of this article was the reference to the Worker-communist Party of Iran (WCPI) and a group closes to the WCPI, the organization of the initiative of worker-communism, in their own critique, not the ideology of worker-communism in general and, most importantly, not the process of the formation of this bourgeois and counterrevolutionary ideology. In this regard, the comrades write: 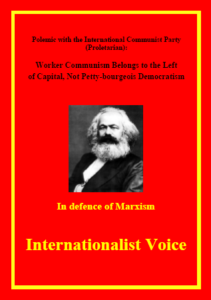