Polemic with the International Communist Current: Excuses of Revolutionary Publication

”The philosophers have only interpreted the world in various ways; the point, however, is to change it.” Marx

Concerning the workers’ protests in Iran, which in the course of its evolution in the autumn of 2018, at some point out of defence and taking on an offensive form, the Internationalist Voice published a leaflet on 30 December 2018, entitled “Lessons from strikes, labour struggles and internationalist tasks”, which was a balance sheet of these struggles.

Every current or political tendency is trying to spread its positions and ideas at a wider level, and this is quite logical. But the question that is posed here is, why does the ICC not publish its critique of Internationalist Voice in Farsi on its website? The ICC has its critiques in Farsi, non-publication in Farsi in this case is deliberate. The ICC consciously wants, for as long as possible, only a few to be aware of its text, because the content of it clearly reveals to those who are familiar with developments in the region the confused position of the ICC. 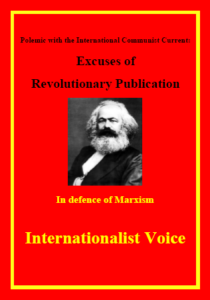