The working class still is the only revolutionary class!

After the scene of the workers’ protests of May 1968 after the collapse of the Eastern Bloc and the failure of Stalinism, the Democrats triumphantly announced the end of class struggle and the eternity of the class system. The bourgeois ideologists, with the failure of the Eastern Bloc, announced that the collapse of Stalinism indicated the end of any attempt of the working class as a revolutionary class. They also stated that a class named the working class essentially no longer existed, and society left behind the industrial revolution and, with the information technology revolution, entered the era of computer science. In this era, it is no longer workers but “robots” that produce everything and provide all the services; the living standards and people’s welfare will not be comparable to the living standards of the workers in former centuries.

When we look at the history of the formation of the capitalist system and its functioning, the myth of the “productive mode of information technology” collapses, and still clearly reveals the undying power of the creators of human blessings, the working class. In the era of capitalist development, wherever they came to power, the bourgeoisie broke the feudal relations, concentrated and intensified the industry and means of production and expanded commodity production. With the development of commodity production the bourgeoisie replaced naked exploitation with the complex exploitation of superstition and religion. [1]

The characteristic properties of a capitalist society is commodity production, accumulation of capital and the division of society into two main classes, the bourgeoisie and the proletariat and consequently the obvious class conflict comes into existence. These properties still exist all around the capitalist world, the world of capital. First of all, it should be emphasized that communism is not the fair division of poverty and misery but a society with higher human values ​​and welfare. Thus, the precondition of a communist society is the development of the means of production, the concentration of industry and the existence of proletariat labor.

Because of these necessary preconditions, it was impossible to establish a communist society before capitalism entered its stage of decadence. With the First World War, capitalism began to decline. It is important to note that the decline of capitalism does not mean the end of development of the productive forces, but rather that the development of the productive forces during this period of decadence is much more destructive and the capitalist relations become chains on the hands and feet of the workers.

The myth of the disappearance of the working class as a class and creator of human blessings, and the formation of the “middle class” with its relative welfare is only a part of demagogical propaganda of the bourgeois ideologists against the sleeping giant. Saying “Informatics mode of production” has no historical arguments, has no scientific argument, has no economic arguments, even with the norms, terms and standards of the same ideologues or their institutions. Let us examine these issues.

The population of Earth in 2011 was about seven billion and the total labor force in the same year was three billion two hundred and sixty-four million people (3.264.000.000). [2] The contribution of branches is as follows.

The above statistics indicate that:

This is not the first time that the capital has had recourse to an increase in the level of productivity in order to try to save the variable capital. With the arrival of diesel engines and, most importantly, the arrival of electricity in the early twentieth century and the replacement of the engine with electrical appliances, society was deeply changed, and the productivity level once again increased, while millions of job opportunities disappeared, and the capitalist mode of production still survived. This was repeated again in the late twentieth century as computer science penetrated all levels of society, including industry, and led to dramatic changes in society as jobs once again disappeared and productivity level increased. However in order to produce human comforts labor is still needed.

The development of the productive forces is essential for the development of society. Capitalism also needs the development of the productive forces because without capital accumulation capital is not able to function. Over the past two hundred years and especially during the last hundred years the productive forces have changed dramatically. If large parts of the working class in the early twentieth century were illiterate, nowadays far more of them have an academic education. The skills of an ordinary worker nowadays are not comparable with those of a worker a hundred years ago. Nowadays workers work with computers and machines more complex than computers or “robots” and sometimes master several languages. What is absent in the bourgeois ideologists’ arguments is that in order to create these “robots” and other complex machines, more than tens of thousands of hours would be spent. What happens with the time spent to create these complex devices? Apparently bourgeois ideologists do not see this part.

All of the above arguments show that the more society becomes industrialized, the more the productive forces develop and the time needed to produce human comforts will be less. But still it is the working class that will produce these comforts. These are the same conditions that make the establishment of a communist society possible and easier.

Bourgeois ideologists offer the relative prosperity of the community. People in society are educated humans who live in modern homes, work with computers, have cars, their living standards and capabilities are not comparable with the living standards of workers in the nineteenth century. 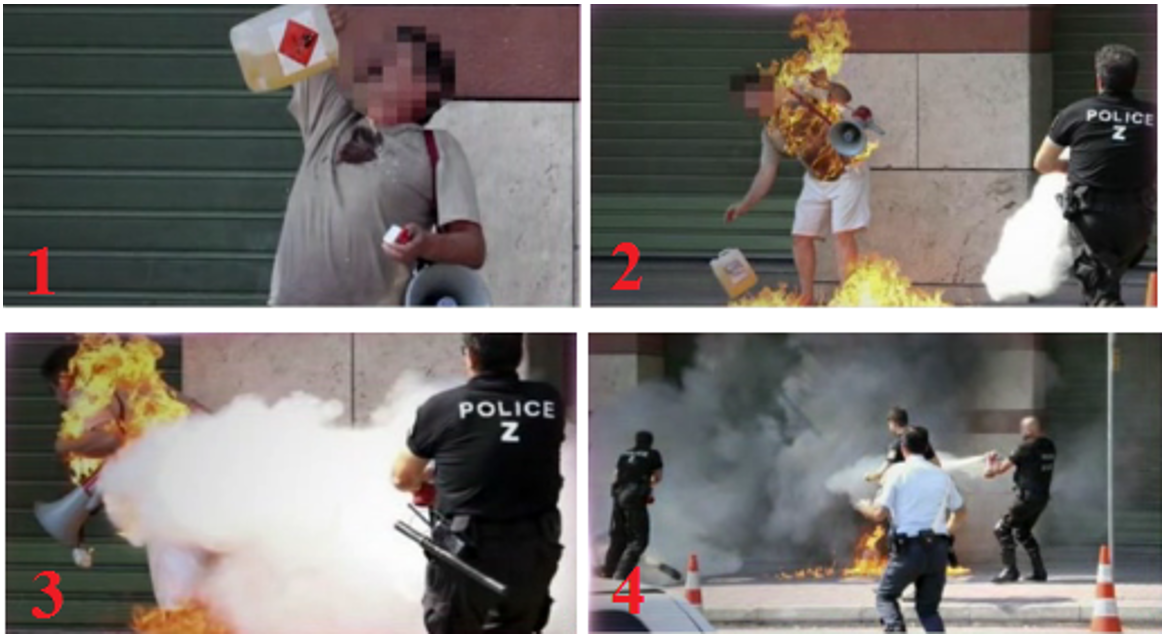 On the 29th of June 2012, a 48-year-old unemployed person in Birmingham, England, set himself on fire in front of a job office in protest against unpaid unemployment benefits. The economic austerity of the British bourgeoisie is the main cause of such actions. On the 24th of May 2012, the MailOnline in Great Britain published an article entitled: “Shock 15% rise in suicides since the recession as unemployment and bankruptcy take their toll”[4]. The article examines the causes of suicides between 2007 and 2011 and through the statistics shows that about 3,500 people committed suicide in England and Wales in 2011, a 15 percent increase as compared to 2007.

On the 3rd of February 2013 an unemployed French person set himself on fire in front of the employment office in the city centre of Nantes, France, committing suicide because of unemployment. He had already sent letters to the office of Employment and stressed that if he did not get help to find a job, he would commit suicide.[5]

In 2009 it became apparent that in a French telecommunications company, about 35 workers committed suicide over a period of 18 months,. The title of an article from the newspaper “The Independent” which was published in England on the 30th of September 2009 is: “Why are so many France Telecom workers dying?”. [6]

At least 18 Italian workers committed suicide in the first quarter of 2012 due to problems caused by the economic crisis and high unemployment. [7]

Capital’s permanent need of the development of forces in the pursuit of higher profits will lead to crisis. It breaks down the collective power of the working class which results in an increase in crime, drug abuse, suicide, and despair in society. The proletariat does not have any economic interests; it only has its organizational power through the councils and class consciousness.

In the era of capitalist decadence, the struggle between capital and labour means a struggle between all the exploited workers of the world against all the exploiters, the class struggle between the proletariat and the bourgeoisie with an internationalist orientation, and the proletariat cannot extricate itself unless it extricates the whole of humanity. Communism is not a barbaric equal division such as the Eastern Bloc but rather a society worthy of humanity in which the free development of each is the condition for the free development of all.

In our era, the working class is still the only revolutionary class, and only this class can carry out the communist revolution and put an end to the barbarity of capitalism. There is certainly a heavy responsibility on the shoulders of the proletariat of the metropolis of capitalism, because there is no possibility of building a socialist island, and the creation of a communist world is the task of the whole of the proletariat.

[3] Figures given by C.H. Feinstein, Structural Change in the Developed Countries in the 20th Century, Oxford Review of Economic Policy, vol.15, no.4 (Winter 1999),  table A1