The Post-Corona World On the Ruins of Corona’s Pandemic

The pandemic has cast an ominous shadow over society. The coronavirus has spread to all parts of the globe and is committing massacres and socioeconomic devastation. The number of massacres in just six developed western countries alone is more than 160,000 [1]. The most advanced and modern cities have taken on the appearance of war. The busiest and most modern cities have become ghost towns – cities that have presented a relaxed impression of metropolitan capitalism since at least World War II. The bubble of peace, tranquillity and social welfare has erupted; the nightmare of unemployment has gripped millions in a matter of days; millions have been added to the army of the hungry; and the brutality of capitalism has exposed its naked face.

War-like conditions have been established worldwide. Just like during the war, restrictions have been placed on the provision of basic necessities for the working class and lower strata of society. As in wartime, medical staff are facing a shortage of equipment in the most advanced countries, not only in peripheral capitalism but also in metropolitan capitalism. In Spain and the United Kingdom, medical staff use garbage bags as protectors. In Japan, people are being asked to hand over their raincoats to medical staff. In hospitals in the UK, medical staff are reusing disposable equipment. In New York, due to the large numbers, victims are buried in mass graves like during the war.

The issue of the oil war between Saudi Arabia and Russia has not yet ended, but on 20 April 2020, for the first time in history, Texas oil prices fell to minus $38 a barrel. The main reason for this historic fall in oil prices and decline in demand is the economic crisis caused by the coronavirus pandemic, as well as an oil surplus, which cannot be stored due to the high cost of storage.

Apparently, humanity is in shock, not only in terms of peripheral capitalism but even in metropolitan capitalism. The main question is why a system equipped with the most advanced military, intelligence, espionage and security equipment is so incapable of ensuring human health. The bourgeoisie pretends that the coronavirus pandemic cannot be controlled, which is nothing but a lie. The coronavirus pandemic is not a natural disaster but a product of the capitalist savagery system, in which the goal is not to meet human needs or promote human well-being but to maximize profit at all costs.

The austerity policies imposed by capitalism on society in recent decades have not only improved the healthcare system in peripheral capitalism (in terms of savings and research) but have also meant that healthcare in metropolitan capitalism has become frayed. Despite the sacrifices of staff in the most advanced countries, the frayed treatment system is unable to respond to the pandemic. Surgery and other important treatments, such as for cancer etc., are now a low priority, which will have detrimental effects in the future.

Basically, in times of crisis, cooperation should replace competition, but the most civilized gangsters have abandoned the mask of civilization and morality and have fallen apart like bandits. The US stole masks and breathing apparatus destined for France, Germany and Brazil. France confiscates shipments of masks intended for Italy and Spain. Germany paid more for the masks sent to Slovakia. The Czechs confiscated a shipment of masks destined for Italy. Germany confiscates Swiss masks. This list could be long. Competition within the European Union, instead of cooperation, has tarnished relations, which will hinder future cooperation.

The strategy of the capitalist states has been herd immunity or lockdown. Some states in metropolitan capitalism have paid 80% of workers’ wages in order to impose a quarantine and prevent labour and social protests. Of course, in some countries (for example, in Italy), this is low, and in the US, only $1,200 is paid for low-income groups. The US Senate has approved a $2 trillion plan to reduce the effects of Covid-19, which is the largest economic stimulus in US history. The German government has set aside €1.3 trillion to deal with the crisis caused by the coronavirus. According to a survey conducted by the German Chamber of Commerce and Industry (DIHK), one in five German companies is on the verge of bankruptcy. Other countries, both in peripheral capital and in metropolitan capital, have considered economic stimuli to prevent complete bankruptcy of the capitalist economy. Will capitalism, boosted by an economic stimulus, be able to solve the crisis caused by the corona pandemic? Firstly, these plans will increase the debt of capitalist states, and in the process, capitalist states themselves will once again implement austerity policies to tackle budget deficits. It should not be forgotten that the most industrialized countries in the world are also the most indebted countries in the world (with the US being the most indebted state of all) [2]. Secondly, these economic stimuli are negligible due to the unimaginable amount of corruption caused by the corona pandemic. These economic stimuli are insignificant due to the unimaginable amount of damage caused by the corona pandemic, and as they are only aimed at reducing the bankruptcy of the capitalist economy, not the welfare of the working class, such economic stimuli cannot repair the damage.

The World Labor Organization estimates that the coronavirus pandemic will cause about 200 million job losses worldwide. In the past month alone, more than 25 million jobs have been lost in the US, and 26 million people have applied for unemployment benefits (the worst employment situation in the US for 100 years) [3]. Unemployment in the US fell to 3.5% before the coronavirus pandemic, reaching 16% in April [4]. As millions of American workers became unemployed and life became a nightmare for them, billionaires became rich again, and the wealth of Jeff Bezos (the world’s richest man) has increased by $24 billion [5]. Tesla and Zoom bosses have each added $1 billion to their fortunes during this period.

During the crisis of 2008 (the most stagnant year since 1930), the world economy shrank by only 0.7%. Most importantly, at that time, China had large foreign exchange reserves and was able to inject a trillion dollars into the bankrupt US market, which, while helping the US economy, expanded China’s influence in the US and throughout the rest of the world. Kristalina Georgieva, President of the International Monetary Fund, has declared that the current crisis is the worst since the Great Depression of the 1930s. During the 1929–1933 recession, the global economy shrank by a quarter, and the unemployment rate fell by about 25%. Capitalism has not yet been able to straighten its back since the 2008 crisis. It is important to note that the decline in GDP in metropolitan capitalist countries will be greater than in other countries, which will certainly affect not only economic equations but also the global political balance. Even China’s economic growth will fall to 2%, the lowest level since 1976 [6]. The chart below compares the world’s top seven economies in 2019 and 2020. It is important to note that the 2020 figures are estimation of the International Monetary Fund. 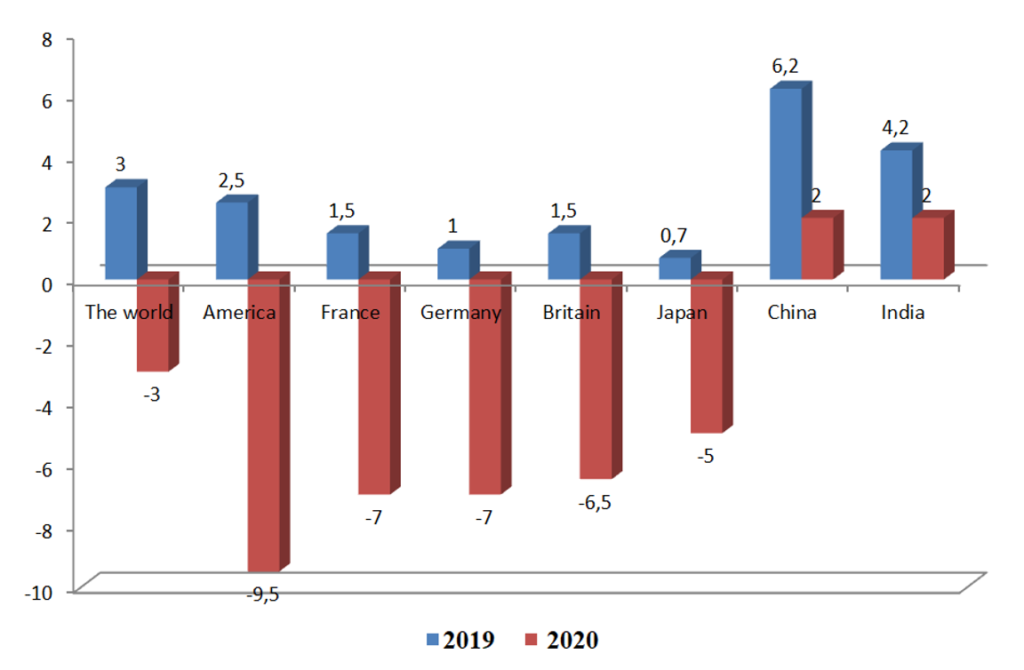 The post-corona world will be a world of intensified imperialist competition. In the post-corona world, American hegemony will be further reduced, and the rivalry between big and small gangsters will intensify imperialist tensions. Will China replace the US and gain global hegemony? Prior to the corona pandemic, China was also trying to strengthen its position in the world by strengthening its role in countries along the Silk Road. With the coronavirus pandemic, this policy has accelerated. In line with its imperialist interests, China has provided equipment and personnel assistance to African countries such as the Congo, Ghana, the Ivory Coast and others. China has also increased its official and unofficial media coverage in the field of propaganda and ideology, and the 24-hour CGTN news network in English has played an important role in this regard. There has been speculation that China will consolidate its position in the post-corona world or expand its position (and such speculation has even been associated with well-known bourgeois publications such as Foreign Affairs) [7]. In the post-corona world, China may make economic progress and even improve its position in the military, increasing its influence in the Silk Road countries and especially in Africa, but China is neither strategically nor ideologically capable of playing such a role. So, China will not be able to replace the US, at least in the short term. It should not be forgotten that about 62% of the world’s foreign exchange reserves are still in US dollars, and the US dollar carries with it hegemony.

The coronavirus pandemic will lead to widespread unemployment, falling living standards for the working class, inflation, social problems, psychological problems and dozens of other problems. The bourgeoisie is certainly preparing itself for the post-corona world. The bourgeoisie will try to promote and agitate for patriotism and sacrifice the working class and lower strata of society (in the name of national interests), recouping the costs of the crisis by reducing welfare costs, by austerity policies, by freezing wages, by reducing pensions and by more exploitation.

The post-corona era also presents new tasks and responsibilities for internationalists. Communists are not deterministic. They believe in the involvement and influence of revolutionaries in the class struggle. Without the intervention and influence of revolutionary tendencies in social protests, the dormant anger of social protests will be drained, and social protests will not be able to rise to a higher level. Will internationalists, especially those who play a leading role in the proletariat, be able to meet the tasks and needs that the post-corona era will seek? The communist left must not only defend proletarian positions but also play an active and effective role in workers’ protests and other social protests that will take place among the ruins of the corona pandemic.

Capitalism smells of blood, dirt and sludge. If the working class does not follow its historical decree, that is, the overthrowing of capitalism through communist revolution, the destruction of humanity is inevitable. The destruction of humanity must not only be achieved through world war but also through the brutality of capital, the virus pandemic and environmental catastrophes. To put an end to the barbarism and savagery of capitalism, the alternative of the internationalists is more valid than ever:

Communist Revolution or the Destruction of Humanity!

[1] The US, Britain, Spain, Italy, Germany and France.