The continuation of the protests, labour strikes and general strike

Despite the unbridled repression of the police state, the protests continue. Unlike the previous street protests that were suppressed by police brutality, this time the repression has failed to suffocate the demonstrations, and every loss of life, like gasoline on a fire, causes more to flare up. The criminals of the Islamic bourgeoisie were able to establish their disgraceful rule only with organized killing and bloodshed, and naked repression has been an integral part of the daily operation of the criminal Islamic bourgeoisie.

The continuation of the protests has caused them to spread to small towns. But the persistence of the demonstrations alone will not lead to the downfall of the regime, and the dirty Islamic bourgeoisie can continue its disgraceful life with unbridled repression as well as by exhausting the protesters. Only the entry of the working class into the protests as a social class can change the equation.

From the far right to the far left, they know that without the working class joining the social protests, the Islamic bourgeoisie will be able to suppress them in the long run. From monarchists to nationalists, from the Tudeh Party and the Majority organization [1] to sects attributed to worker-communism, they want a general strike. The use of the nationwide strike hashtag is also increasing on social media.

In their advertisements, they consider the strike of shopkeepers and marketers in different cities to be a national one. They spread its photos and want the working class to join this “general strike” so that the regime of the mullahs is overthrown as soon as possible. They degrade the protest to the level of mullah, hijab and anti-regime ones. The dirty Islamic bourgeoisie must be ousted, not so that a secular regime can replace the religious one, but because capitalism must be brought down and the brutality of capitalism with any ideological superstructure (religious, secular, etc.) must be ended.

Contrary to the demagogues of the right and left tendencies of capital, it is not the shopkeepers or businesses but the working class that should organize the general strike. A general strike can only be formed after a series of frequent labour protests and strikes in order to involve the majority of the working-class masses. A general strike, on the one hand, should be able to affect the production of goods or the provision of services in society and show the power of the working class, and on the other, cause the class struggle to rise to a higher level.

In recent days, we have witnessed workers’ demonstrations and strikes, and the common feature of all of them has been the protest against their low level of wages and the defence of their living standards. The slogan of the striking Esfahan Steel Company workers, “enough with promises, our table is empty”, is a reflection of the difficult life conditions of the entire working class. A few examples of labour strikes in recent days that had or have the same demand are as follows:

It could be said that while the “people” are covered in blood in the protests, the working class is only looking out for their economic interests with these strikes and is not entering into the political struggle. In the decadent age of capitalism, imperialism, we have only one kind of class struggle. More than a hundred years ago, Rosa Luxemburg emphasized this issue in her work titled The Mass Strike, the Political Party and the Trade Unions:

The fact that the working class has achieved very little with thousands of protests and labour strikes every year, and that despite this militancy, the labour struggle does not rise to a higher level, shows the bitter reality that, unfortunately, except for short periods (such as autumn 2018), protests are always isolated in the workplace. The isolation of labour protests and strikes from each other has made the working class unable to use its class solidarity and put its stamp on developments as a labour power. Therefore, in most cases, the strike has been broken with the management’s empty promises.

The undeniable fact is that only the working class as a social class can end the calamity of the capitalist world, but only if this sleeping giant becomes aware of its class identity as an independent social power in societal events and starts its independent struggle, because the working class can repel the attacks of the bourgeoisie only from its own class ground.

The working class should advance its independent struggle with class goals and should not become the black army of the anti-dictatorship movement. We have to fight for our class interests. We should not become the black army of another “Guadeloupe” [2]. Now that the imperialists have held the Halifax conference [3] and are producing “famous faces”, “famous opponents”, and “prominent activists”, the right and left tendencies of capital also want the nationwide strike of the working class to be a springboard for changing the political superstructure of society. If they ever demand that a council should have power in the community, it is only a part of their propaganda. What they mean by council power is self-government, as in Rojava, under the shadow of imperialist powers. All the imperialists would oppose a real Soviet power, like the young power of the Soviets in the 1917, against which all the imperialist powers organized a military attack to contain the October Revolution and prevent its spread. One of the leaders of the Communist Party explains what he means by council power. With the references to the Paris Commune and the October Revolution included only to prepare the reader for the main explanation, he writes:

“The revolutionary option must be accepted by the capitalists and reactionaries with the presence of an organized, armed and revolutionary force, and informed and at the forefront of society. An example of such a revolutionary approach is the Paris Commune and the October Revolution, and now with the self-management of a council in Rojava in the north and east of Syria, we are facing [the self-management of a council] which the executive guarantee and furtherance of that are the Women’s Protection Units (YPJ) and People’s Protection Units (YPG) and popular self-management (communes) and the presence and internationalist support of Catalonia in Spain, France, Germany and other European, American and Asian countries, and the Zapatista movement in Mexico” [4].

Capitalism smells of blood, filth, war, barbarism, etc. More than ever, the future of not only the working class but humanity as well is in the hands of the working class. Only this social class is capable of carrying out a global communist revolution. It is only by overthrowing capitalism through a communist revolution that the working class can put an end to the daily destruction of human beings everywhere on this earth, provide a system worthy of human dignity and humanity, in the form of a classless society, and save the entirety of humankind from the brutality and filth of capitalism.

Long live the war between the classes!

[1] The Tudeh Party and the Majority organization played an important role in stabilizing the Islamic bourgeoisie until they reached the level of the intelligence agencies of the Islamic bourgeoisie. The Majority organization in particular assisted in exposing members of other political currents and maintained close cooperation with the intelligence agencies.

[2] In 1979, the global bourgeoisie found it necessary to change the structure of the political system in order to prevent the radicalization of labour protests. Therefore, the countries of America, England, Germany and France held the “Guadeloupe” conference and the Islamic bourgeoisie (led by Khomeini) replaced the royal one. 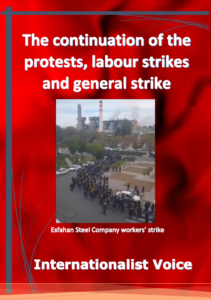