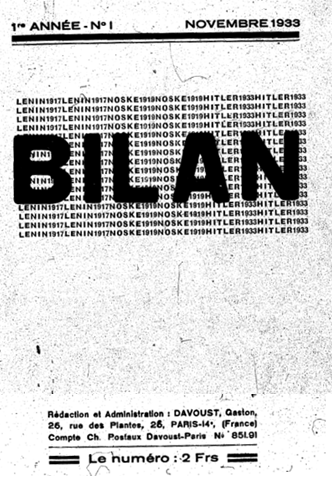 On the cover of the first issue of the magazine, Bilan, November 1933

Our policy is not to publish or address any letters or questions that we have received. However, one of the questions submitted to Internationalist Voice was of such importance that we have decided to publish a response. Certainly, the answer to this question can be the subject of dozens of pages of serious text and much research. However, we have tried to provide a short answer that would reflect the position of the Internationalist Voice.

During the wave of world revolution in the years 1917–1924, if the left faction of the German Social Democracy Party had shown the strong determination of the Bolsheviks and its umbilical cord had been separated from the dead body of social democracy—rather than waiting for years to be separated from the right-wing of social democracy— then perhaps the historical course of the world revolution would not have been interrupted and it may be that the world revolution would have been won. In the early 1980s, the sleeping giant of Poland (the Polish proletariat) began to awaken. The class struggle spread across Poland and rang the death knell of capitalism. However, in the end, due to the lack of a revolutionary organization (Internationalist Communist Party), Lech Walesa kissed the hand of the Pope, the symbol of the ideology of capital.

It is also essential to mention that the dictatorship of the proletariat exercises power through the workers’ councils, not through a party dictatorship, the conventional tradition within the left of capital. The task of the Party in the dictatorship of the proletariat and until the abolition of classes is to defend the communist programme and to pursue the abolition of social classes. The Internationalist Communist Party then loses its relevance in a classless society as the prerequisite for a communist party does not exist.

Capitalism is the origin of wage slavery, exploitation, the alienation of man by man and, in short, is a real and earthly hell. Capitalism smells of blood, dirt and mud. Only with the overthrow of capitalism through the communist revolution can a decent human existence be achieved because, without the communist revolution, freedom from the barbarism of capital is not only impossible for workers but also does not exist for humanity. Certainly, the destruction of humanity does not only occur in world wars but it can also take other forms, such as environmental risks or decline through the continuity of capitalist barbarism. Is it not appropriate that the slogan of Internationalist Voice is “communist revolution or the destruction of humanity!”